"Achieving more from less with dairy and arable collaboration"

"Who will milk the cows? - the recruitment, training and retention of high quality workers in the dairy industry"

"Reducing dairy farm costs to prosper in a global market"

"Planning for the future of the family dairy farm"

"Consumer attitudes to how milk is produced"

"Knowledge transfer of science and genetics to farmers"

* jointly sponsored with The Trehane Trust 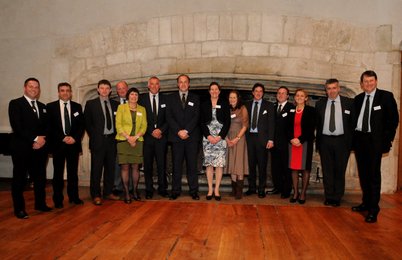 Over the last 60 years, the NUFFIELD FARMING SCHOLARSHIPS TRUST has provided over 800 people – in agriculture, associated industries and the rural community - the chance to travel to expand knowledge and understanding.

To date some 1600 Scholars worldwide have benefited from Jack Maclean’s proposal to Nuffield and his Foundation that it should encourage the advancement of agriculture.

Since 1992, the Dartington Cattle Breeding Trust have supported 26 Nuffield Scholars on their learning journey.

"How to get the whole UK dairy industry using antibiotics responsibly"

Further details about Duncan Williams can be found on the Nuffield Website, www.nuffieldscholar.org

ABOUT THE NUFFIELD FARMING SCHOLARSHIPS TRUST